McCarthy storms to Silver on another hugely successful day in Rio 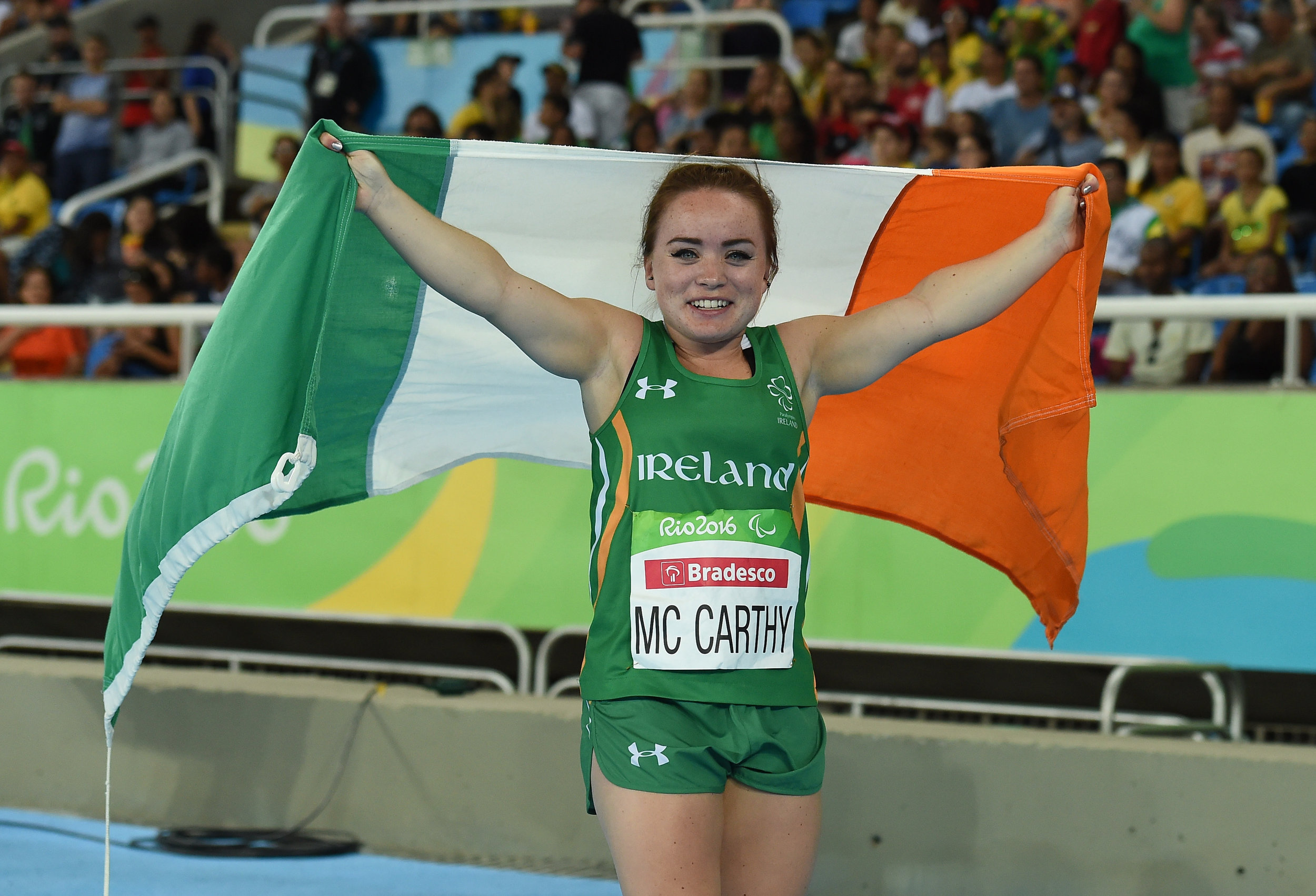 A day that began with a silver medal for Ireland courtesy of Orla Barry in the F57 Discus final ended in fantastic fashion as fellow Cork athlete, Niamh McCarthy, also secured silver in a hugely competitive F41 Discus final with a throw of 26.67 meters.

In a tightly fought competition, McCarthy opened cautiously with her first attempt but a second throw of 25.36m placed the Cork native solidly behind Raoua Tlili of Tunisia who set a world record of 33.38m to go into the lead. A third round throw by another Tunisian in the field, Fathia Amaimia pushed McCarthy back into third place for the final sequence of attempts.

The next two rounds saw McCarthy struggle to produce her best form while a number of competitors surpassed her mark to leave her placed 5th overall. True to character, McCarthy dug deep, producing a superb 5th round throw which proved to be her best of the day and pushed her back up into second position behind the eventual winner and world record holder, Raouo Tlili.

Speaking after the event, an excited McCarthy said, “I have few words right now. It was a hard competition and I pulled through in the end. I got what I came here for. I wouldn’t change anything in the past few months.”

Commenting on the pressure of the final rounds, she added “I felt guilty wanting the others not to do well but they did throw well – I just threw better. Following my roommate Orla Barry’s success today, I don’t know how we will celebrate but it will be one of the best nights of my life for sure.”

Meanwhile, after a hugely successful day in road cycling for Ireland yesterday, action continued today with Declan Slevin competing in the H3 Road Race. In a very fast-paced race, Declan equipped himself well to stay with the main group for the opening lap, but Italian rider Vittorio Podesta upped the ante in the second lap, to really increase the pace of the leading group, causing Declan to drift off the back at the halfway mark, leaving him over a minute behind the 11th place rider, USA’s Will Lachenauer.  However a determined performance in the third lap saw the Westmeath man move up the field and overtake Lachenauer to finish strongly and secure ninth place overall.

“It was tough out there – they made a big drive for it then and I was struggling and struggling, but I held on and kept going and I started catching one or two of them. I can’t believe I finished ninth, it’s more than I could have ever asked for – I’m over the moon!” he said afterwards.

“If you told me 12 years ago that I would have ninth place in the Paralympic Games I would not have believed you for one second. I say to anyone lying in a bed in Dún Laoghaire hospital with a spinal injury that this is it – this is where you want to be [at a Paralympic Games]. I’ll never give up this sport.”

Ciara Staunton was also competing this afternoon for Ireland, she took to the road in the H2-4 Road Race. Staunton, who made her debut at the Games this year, was in a mixed classification and the race proved to be quite difficult in the hot and humid conditions of Rio’s Pontal venue. The 45km race was a stern test of endurance and stamina, which was three laps of a 15km circuit. Staunton was out-powered by athletes in the H3 and H4 classes and was subsequently pulled from the competition with one lap to go to finish 14th overall.

“Today was very tough,” she said afterwards. “It was way worse than yesterday, the heat was just so much harder to bear. It’s very difficult to compete in a mixed class as well – I’m competing against people of a higher classification who have more function so that’s difficult.

“Words don’t describe though how it feels to represent Ireland – it’s been a long time goal to get here, the only person who would have stopped me from getting here was myself and now I’m looking ahead on to Tokyo.”

Helen Kearney was back competing this afternoon, competing in the Grade 1a Individual Championship test and had a disappointing day in the dressage arena where she scored 68.870% in an event in which she won silver in London 2012 to see her finish in 12th place.

Helen – who has changed her horse since London 2012 and has been working with new mount, Rock and Roll 2, for two years – needed a score of 73% in order to make the podium but there was double disappointment because she also needed a 70-plus score to have a chance of making it into tomorrow’s Freestyle competition.

Only the top third of the field – on a combination of today’s individual championship scores and the riders’ mark from the earlier ‘team’ championship – qualified for the freestyle,

Having also scored 68% in the team competition, the 27-year-old from Dunlavin needed a dramatic improvement yesterday but it just wasn’t her day.

“I’d have loved to make the Freestyle but I think, after the first day, I had to manage my expectations and knew I wouldn’t quite make it,” she said. “Overall I’m really pleased with the horse and how it went today but just disappointed with the score. I’d have loved to have done a bit better for myself and for everyone at home as well, but it obviously just wasn’t my Games this time.”

Meanwhile, the Irish sonar crew of John Twomey, Austin O’Carroll and Ian Costelloe were back in action again today for Races 7, 8 and 9 in this Paralympic Regatta all scheduled to take place. In Race 7 with wind speeds of up to 13 knots, the Irish boat passed the first marker in 9th place but was unable to hold the position, finishing 12th overall. Race eight proved more challenging for the Irish crew with increased wind speeds of up to 15 knots where they ultimately completed the race finishing in 14th position.

The third race of the day, Race 9 race, was postponed until tomorrow, leaving the Irish crew in 11th fleet position overall after eight races.

Ireland’s Nicole Turner and Ellen Keane have finished seventh and eighth in their respective Finals on Day 8 of Swimming at the Rio Aquatic Centre.

Turner, at just 14 years old, was swimming in her fifth final of five events and swam a personal best , her third this week, in the SB6 100m Breaststroke Final. A time of 1:46.19 was one tenth of a second faster than the time that won her Bronze at this year’s IPC European Swimming Championships in June and over two seconds faster than this morning’s swim “I’m pretty impressed after that, I came into the race exhausted, today I’ve been really tired, I’ve just been tired from the whole week but to pb in that when I wasn’t even expecting to go my old time, I’m really happy.”

World Record holder in the SB6 100m Breaststroke,15 year old Tiffany Thomas Kane of Australia, took the Gold medal in the Final breaking the Paralympic Games Record for the second time today in 1:35.39.

Ellen Keane had high hopes after a personal best swim in the S9 100m Butterfly heats this morning where she advanced in sixth place with a time of 1:10.95. But, the fatigue from last night’s Bronze medal win in the SB8 100m Breaststroke and her swim this morning caught up with the 21 year old who was “wrecked” after tonight’s final and touched in a time of 1:11.27 “This morning I went a 1:10 and I was really pleased with that, I never swam a time like that before and that was a three year old PB. Tonight I tried to aim for under 1:10 but unfortunately my legs just gave way and yesterday took its toll on me today. I came to tonight’s final really motivated and trying to ignore the tiredness I could feel , I couldn’t ignore it though, I tried my hardest there and when I got out of the pool I found it hard to stand up so that just goes to show how hard I did try, I didn’t give up.”

Keane returns to the pool tomorrow for her final event, the S9 100m Backstroke, while Turner has a rest day and will swim her final event on Saturday.

Keane returns to the pool tomorrow for her final event, the S9 100m Backstroke, while Turner has a rest day and will swim her final event on Saturday.