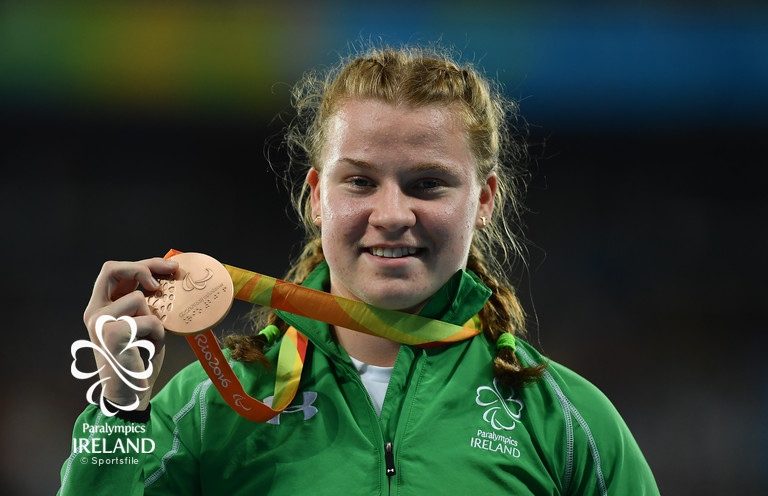 Cork teenager Noelle Lenihan took Ireland’s medal tally at the Paralympic Games in Rio to 11 with a bronze medal in the F38 Discus final this evening.

The 16-year-old from Charleville was tipped to do well on her Paralympic debut after winning World silver and European Gold in the last 12 months, securing both with world records in her classification and got off to a great start with a first throw of 31:71m, not far off her 32:14m personal best and secured a new Paralympic record in her F38 category.

The competition also included China’s Na Mi, a four-time F37 and F38 Paralympic champion in both shot and discus who went on to smash her own F37 world record with a massive opening throw of 37.60m and Lenihan dropped into third place when local woman Shirlene Coelho overtook her with 32.55m in the second round.

After recording throws of 29:17m and 27:81m, Lenihan reached the half-way mark in third position, knowing she would have to pull out a PB to get the silver but that was put even further out of her reach when the Brazilian launched out her second PB of the night with 33.31m in the fourth round.

That first round 31.71m was still enough to clinch bronze for the brilliant young Irish thrower who was the youngest in the field by far and undoubtedly has a long career ahead of her.

Her bronze also made it a ‘rebel treble’ of medals for Cork discus throwers in Rio as Orla Barry and Niamh McCarthy both claimed silver in their respective F37 and F41 categories.

Speaking afterwards, the Cork teen said: “I feel amazing, to go to my first Paralympics and come out of it a medallist is beyond what I ever thought of. My first throw wasn’t far off my PB which was great, and my throws were very consistent today which I was very happy with… Not many people at 16 can say they have a Paralympic medal – it’s incredible.”

Team Ireland’s James Scully also had a strong night at Rio 2016 this evening, as he finished 7th in the S5 100m Freestyle Final on the final night of the swimming competition at the Rio 2016 Paralympic Games.

Scully set a new Personal Best time in this morning’s heats of 1:21.15 to progress in eighth place and despite improving on that time in the final by taking almost a second off this morning’s time, he was 7th overall in 1:20.18.

Speaking after the race, the 23-year-old was very happy with his performance: “I’m thrilled, it’s a fantastic way to finish off the Games; PB, one second faster than I was yesterday. I’m over the moon, it was just slightly off my goal, I wanted to go 1:19 but I’ll take that, it’s a brilliant time. Those last 15 metres hurt like hell, which is what you want, but I gave it everything and there’s nothing more I could have done.”

Brazil’s star of these Games Daniel Dias stormed to Gold in the S5 100m Freestyle Final in 1:10.11, bringing his medal tally to eight; including four gold, three silver and one bronze. Scully has swum in two finals with the Brazilian and is amazed by the noise from the stands:  “It’s mega, there’s nothing that parallels this, the reception Dias gets in the pool is fantastic, fair play to the Brazilian crowds, they’re really putting their support behind it, they’re really motivated and really loud which is great to see.”