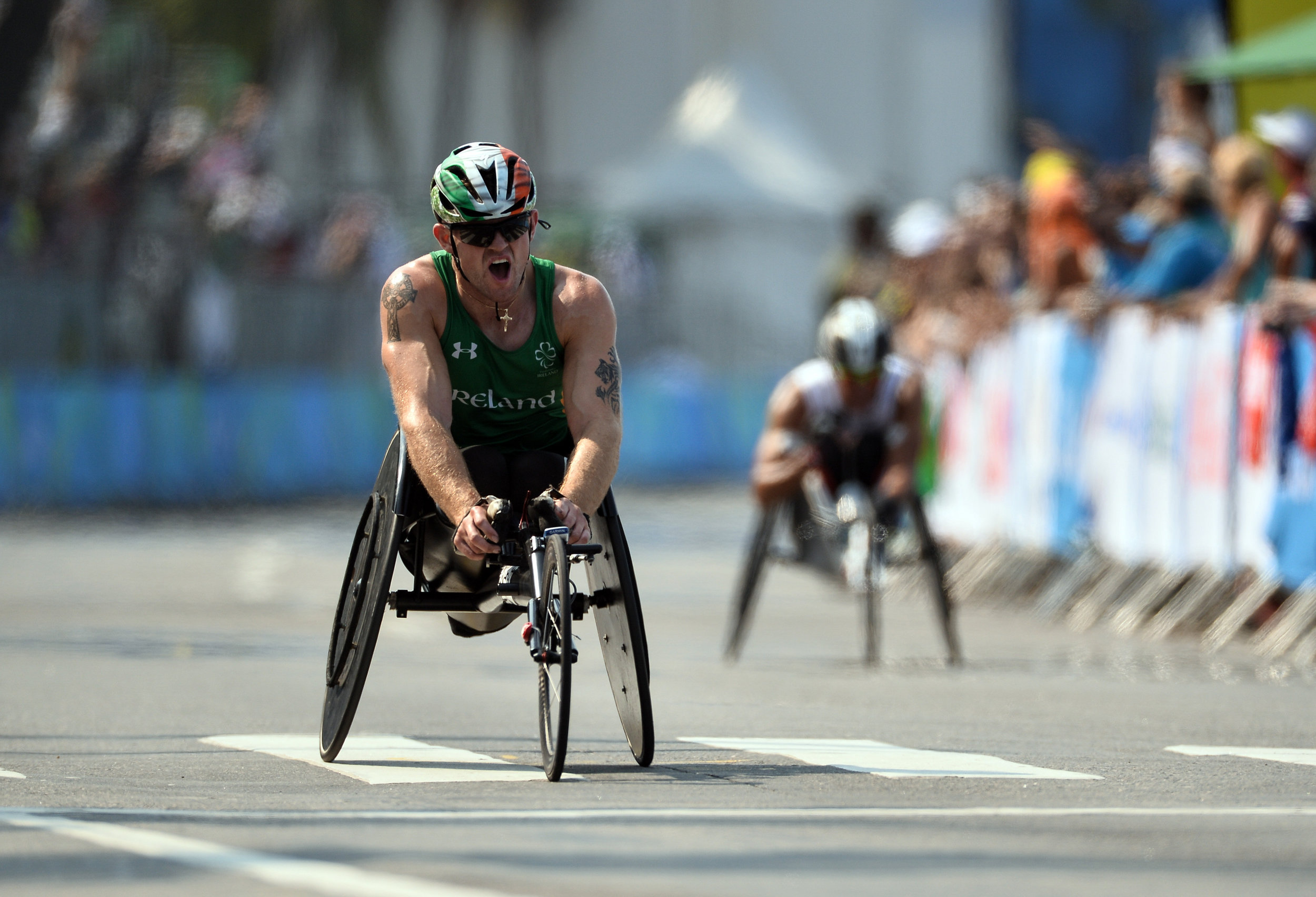 Ireland’s final competitor in Rio, wheelchair racer Patrick Monahan, found the searing 32 degree heat around Copacabana Beach too hot to handle in the T54 marathon, finishing in 16th place in one hour, 40 minutes and 26 seconds, over 10 minutes slower than his personal best.

However several competitors dropped out before the half-way mark and the race was won in a relatively slow time of 1:26.16 by legendary ‘Swiss Bullet’ Marcel Hug.

It was always going to be tough for the Naas man who was hit by illness during his time in Rio which forced him to pull out of the 800m.

“If it was any other marathon I would have dropped out after a lap,” Monahan admitted.

“I had no energy at all, whether it was the heat or the illness last week I’m not sure, but I was drained. I knew it was going to be tough but I didn’t think it would be that tough.

“I was in bed for four days, in solitary confinement,” he revealed. “But I was really well looked after and did some light training but today I was just happy to get to the finish.”

Asked what kept him going to the finish line he said: “My mam and dad are here, my family and girlfriend at home, the support I got from my community and club (Le Cheile), I just had to get to the finish line.”

“I didn’t think there was a sport out there for me four years ago but I love this sport. I’m proud that I’ve got this far in quite a short time.I wasn’t happy with the time but, in some ways, it was my greatest achievement getting to the finish line today.”

Later on it will be with heads held high and tricolours flying that the Irish team will enter the Maracana stadium for the Rio 2016 Closing Ceremony, having arrived, competed and conquered at this fourteenth Summer Paralympic Games.

The Irish team of 48 athletes across 10 sports will be coming home with an incredible 11 medals from the Rio Games – four gold, four silver and three bronze – a number that exceeded all expectations, and a 28th placing on the medals table; inside the top 30 spot targeted at the outset.

From Day two onwards, there were medal celebrations for the team, with Jason Smyth securing first Irish medal of the Games, winning gold in the T13 100m final to successfully defend his Paralympic title and complete a historic treble. Incredible performances from Michael McKillop (gold), Eoghan Clifford (bronze and gold), Colin Lynch (silver), Ellen Keane (bronze), Katie-George Dunlevy and Eve McCrystal (gold and silver), led the team the whole way through to one of the final days, where 16-year-old Noelle Lenihan (bronze) completed a rebel treble of discus medals along with her Cork team mates of Orla Barry (silver) and Niamh McCarthy (silver) to wrap things up in style for the Irish going into the final day.

Although the medals grab the headlines the success for this team runs deeper with many of the team achieving phenomenal lifetime best performances and coveted top ten finishes as they delivered on the biggest of all sporting stages.

As the closing ceremony gets underway from midnight (Irish time) tonight, there will undoubtedly be an overwhelming sense of pride, achievement, success and excitement as Ireland’s youngest team member; Nicole Turner (14) will lead the contingent out as flag bearer – a baton that was passed to her from Opening Ceremony flag bearer and 11-time Paralympian, John Twomey, himself the eldest member.

All of the hours, days, weeks, months and years of training culminated in eleven incredible days of performance, commitment and sheer determination and as the team make their way back to Dublin, there is no doubt they have done themselves and their country extremely proud.

Speaking ahead of the closing ceremony Ireland’s Chef de Mission Denis Toomey said; “Brilliant performances from all of Team Ireland ensured all our targets and expectations were surpassed. To be bringing home 11 medals from Rio 2016 and to finish up 28th on the medal table will hopefully bring as much elation to everyone at home in Ireland as it brings to me.”

The team will arrive into Dublin Airport, Terminal 1, on Wednesday, September 21st with their flight scheduled to touch down at 12.05pm. More information on the homecoming will be announced in the coming days.