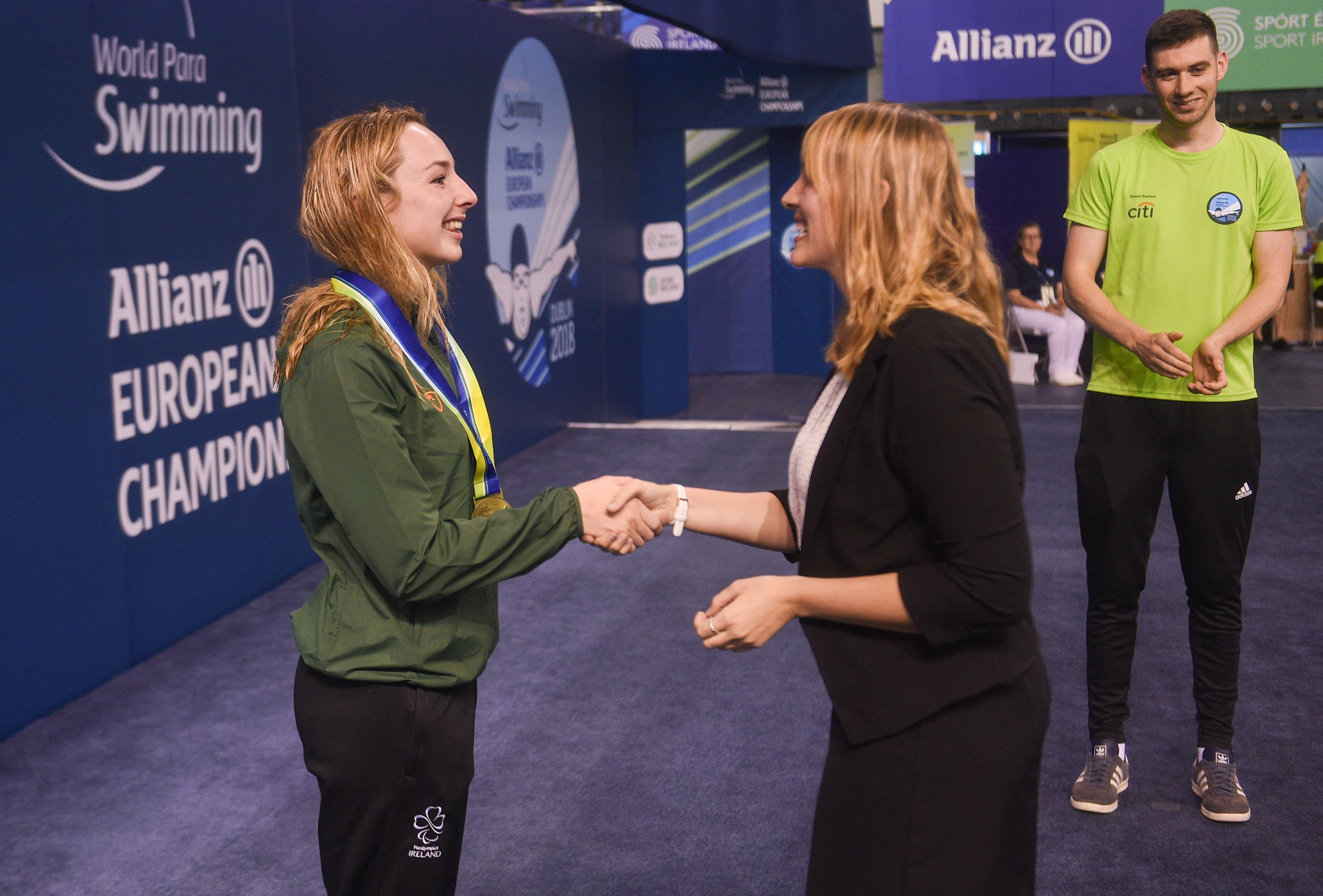 Ellen Keane delivered on her billing as one to watch at the World Para Swimming Allianz European Championships as she clinched the bronze medal that had eluded her and Team Ireland Throughout the week. In a thrilling race it was Keane that was able to hold her nerve and touch in third place.

Keane was greeted by a tumultous applause as she entered the pool but was able to block out the cheers to deliver a composed performance that saw her comfortably hold off the challenge of Zsofia Konkolyy by 2 seconds. Spain’s Nuria Marques lead the 200m Individual Medley home followed by Toni Shaw from Great Britain with Keane electrifying the crowd in third position to take bronze.

Longford’s Patrick Flanagan will consider himself desperately unlucky not to be the swimmer to win a first medal of Dublin 2018 for Team Ireland as he finished 4th, losing out by only 0.26 seconds to Yoan Valkinsky in the final of the Men’s 400M Freestyle. Flanagan has been one of the brightest sparks for Team Ireland throughout the Championships and qualified comfortably from his heat. However, despite powering home and making up a 5 second gap to third, the finish came too soon and he was forced to settle for fourth position.

Jonathan McGrath brought the curtain down on his Dublin 2018 with a strong performancein the Men’s 100M Freestyle S8 event. McGrath has shown some good form coming into the championships and showed that he is on an upward curve as he came home in 6th place despite being ranked 8th coming into the Final.

Ailbhe Kelly maintained her superb form for the championships as she progressed again to the final, this time in the Women’s 100M Freestyle. Ailbhe’s finished 8h in that final after a strong battle throughout. Ailbhe, whose championships came to a close this evening will reflect on a brilliant week as she reached the final in every one of her 4 events.

Ireland’s 5th finalist was Cork’s Sean O’Riordan who competed in the first final of the evening session. Sean will be pleased with his performance after coming home in 8th position and will take a lot from this performance as he looks toward Tokyo. Sean will return to the pool again this weekend on both Saturday and Sunday.

James Scully was Ireland’s other competitior in action today and he also produced the goods bringing his best ever performance in the 50M Freestyle S5. Although he didn’t progress through to the final he was rightly delighted with an exceptional performance.

There were another 4 records set today at the Sport Ireland National Aquatic Centre. The great Denise Grahl of Germany set a new European Record with a time of 32.83 shaving .09 off her own record in the 50M Freestyle S7. Gilli Carlotta was in exceptional form for Italy when she took over a second off the record for the Women’s 100M Backstroke S13 event. Liesette Buinsma broke the record for the Women’s 200M Individual Medley SM11, a record that had stooof for 8 years. Finally the Ukraine Mixed 4 x 100M Freestyle Relay 49 PTS team brought the curtain down on Day 5 in fine style as they destroyed the existing record by more than 10 seconds.

Tomorrow we will welcome back Nicole Turner after her only day off of the championships along with Barry McClements, Sean O’Riordan and James Scully,