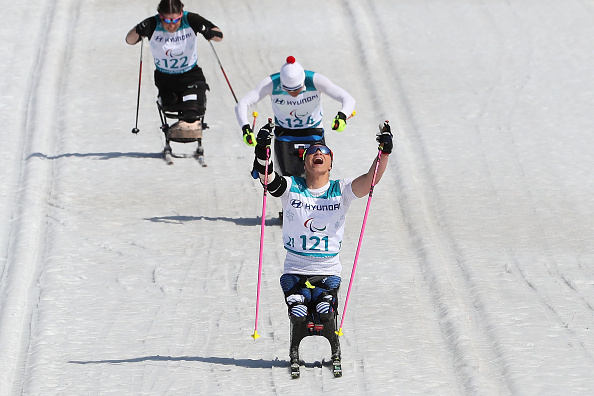 The events consist of a 2.0 or 2.5 km course skied three or five times in the free technique for a total race distance between 6-15 km. Between the two stages athletes must hit two targets located at a distance of 10m. Each miss is penalised by an increase in the overall route time.

The most important success factor lies in the capability of alternating the skills of physical endurance and shooting accuracy during the competition.

Athletes with vision impairment are assisted by acoustic signals, which depending on signal intensity, indicate when the athlete is on target.

Paralympic Biathlon conforms to some of the parameters that have been laid down by the International Biathlon Federation with some adaptations.

The rifle shall be any type of air or CO2 rifle of conventional appearance with a five shot clip and in accordance with specifications of the International Union of Shooting’s (U.I.T) rule. For Blind class the rifle will be equipped with electro-acoustic glasses (optronic system). Blind athletes are shooting with an electronic rifle that allows aiming by hearing.

Biathlon uses metal drop-down targets of which consist of a white target face plate with five target apertures, behind which are five independently operating knock down, falling plate scoring targets. The scoring plates must be black.

A hit must be indicated by the black target circle being replaced by a white indicator disc. The target size has a diameter of 30mm for vision impaired athletes (class B) and 20mm for athletes with a physical disability (class LW).

Some athletes with a physical impairment compete from a sitting position using a sit-ski, also called a mono-ski. As the name suggests, mono-skis have a specially fitted chair over a single ski. The chair includes seat belts and other strapping, as well as a suspension device to minimize wear and tear on the skier’s body.

Made from fibreglass, classical skis are usually 25cm to 30cm taller than the height of a skier. They are light, weighing less than 0.45kg each; and narrow, with curved tips and a cambered midsection, which is thicker and arched. Free technique skis are about 10cm to 15 cm shorter for greater manoeuvring. They are also nominally stiffer and have tips that curve less than classical technique skis. The underside of both types of skis has a groove down the centre to keep the ski straight when going downhill.

Athletes are classified into classes depending on their functional ability. Results are factored to take each athletes’ degree of impairment into account when calculating a time.