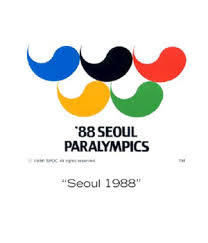 It was a long journey for Team Ireland in 1988 as they crossed the globe to compete at the Paralympic Games in Seoul in 1988. However, the team made light of the distance as they continued their brilliant recent success by winning 56 medals.

Amongst the notable performances at the game were Paul Cassin who won medals in the Discus and as part of the football team that won a bronze medal, the countries first football medal at the Paralympic Games. Gerard Dunne dominated in the swimming pool as he won 5 medals in the backstroke, butterfly, free style and individual medley. Dunne’s performances in the pool were matched by Darrin Jordan on the track where Jordan won a medal of every colour as part of his 5 medal haul. Famous tenor, Ronan Tynan, replicated his success of 4 year previous as he won gold, silver and bronze in the Discus, Javelin and Shot Put respectively.