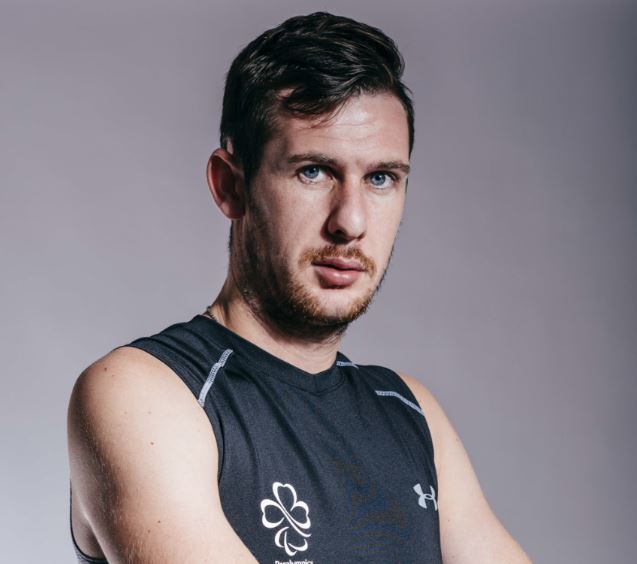 There seems to be just no stopping Michael McKillop.

The 26-year-old from Newtownabbey has become a household name on the national and international athletics stages over the last number of years, and when you take his huge number of accolades into account (including numerous gold medals and world records), it’s not hard to see why.

But behind all those medals – there’s more.

Behind those world records – there’s more.

And when you talk about Michael McKillop – there’s more.

“Because of my disability, I was introduced to sport at a very young age as a form of physio. I got involved with running through my mum and dad, they were both former athletes in their time. My father was also an Athletics coach at a local grammar school, which I went on to attend.

“When I started Athletics, I was competing against able-bodied athletes and saw myself as able-bodied. I wasn’t aware of Paralympic sport at the time, so it was difficult for me to envisage ever competing on the international stage.

“When I attended my first major championships at the age of 15 – where I went on to win two silver medals – it hit me that I could improve on this, and since then, my aim has been to win gold at every other Championship.”

“Sport has been a big part of my life since then. It gives me the chance to show my talent to the world and showcase the ability I have to perform at the highest level, regardless of having a disability.

“Growing up with a physical disability was tough as it was visible to the public. I stood out. I was different to all the other kids.

“In fact, life has never been normal for me growing up as a Paralympic medallist. From the young age of 16, I have been expected to live my life as a world class athlete, I missed out on opportunities and experiences that every teenager usually experiences. As a result, I found myself in dark places at times, trying to live up to people’s expectations. But with the support of friends and family, my coaches, and most importantly Nicole, my girlfriend, I came through it.”

“Yes, I was picked on by other kids at times for my disability, but I didn’t allow those words to affect the way I lived. I realized after a while that everybody is different and that I should be proud to be who I am and in essence, to own my disability.

“My parents were a large part of that, and they inspire me to this day. They were the people who were faced with the challenges of raising a disabled child and now that I’m older, I fully appreciate how daunting and tough it must have been. I owe everything to them,” he reflected, before looking back on that iconic moment from London 2012, where his mother was on hand to present him with his gold medal.

“I never expected anything like that to happen during one of my medal ceremonies. When she walked out, it put a massive smile on my face and made my heart beat a little faster. The moment she put the medal around my neck, I gave her a big hug and really, it was a moment of reflection and relief. Thanks to all of my mum’s hard work while I was growing up and my hours spent training, in that moment we proved to the world that with belief and determination you can achieve anything. I may also had shed a little tear!”

Looking ahead to the Paralympic Games in Rio, he continued: “Now that I am an established athlete, there is that sense of expectation to win every race – but for me, I just need to go to Rio this summer and perform to my best ability and do my country proud.

“A champion is just like a cocktail, made up of lots of little things to create a masterpiece. My training is a key element of that, and having a very strong belief in my own ability, but it’s the team I have surrounding me that makes up the rest of what is a champion. From my girlfriend to my family and on to my coaches and Paralympics Ireland, we all come together to be Team McKillop.

“I had some injuries recently, but now, things are going very well, me and my team have all the niggles under control and we are being consistent with my training. Crossing the line in Doha at last year’s IPC World Championships, I showed to the world and the people in my category that even though it was one of the toughest years of my life, training and injury wise, I could still perform under pressure and still be the best athlete I can be.”

“There is a lot to look forward to, and I am still yet to find a moment I would like to relive in my career so far. One I want to experience though, is to run at a major championships in front of my girlfriend Nicole for the first time ever. On the other hand, if I could relive one moment and change it, I would definitely go back to how I reacted after coming second in the IPC World Championships in 2006. I was a 16-year-old teenager and didn’t know how to react to and deal with disappointment. Thankfully I’ve learned with age!” he added with a smile.

“Now though, I am going to focus on training and on Rio. As for the future – I want to become a well-known After Dinner and motivational speaker, but before that I want to also focus on the things that make me happiest outside of sport and they have to be: my girlfriend Nicole, my family, Arsenal and chocolate!”

“Really though, as an experienced athlete it was great to be a part of the More Than Sport campaign with Paralympics Ireland. I feel very strongly about showcasing the talent we have here in Ireland. More than sport goes beyond winning gold medals and beyond the long hours of training and sacrifices. More than sport is bringing pride to our nation and showcasing what Ireland has to offer across the globe.

“I hold my head high when I introduce myself as a Paralympic athlete. I am proud to be competing at an elite level for my country.”