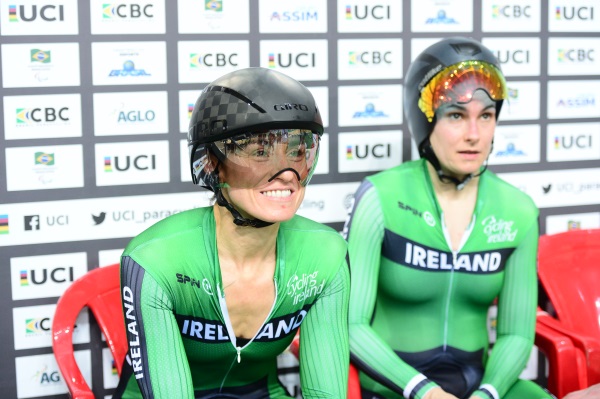 Katie-George Dunlevy and Eve McCrystal have defended their world title in the Time Trial at the UCI 2018 Para-cycling Road World Championships in Maniago, Italy today.

The Paralympic Champions finished the 27.7km Time Trial in a time of 35:26:37, seventeen seconds ahead of silver medalists Lora Fachie and Corrine Hall from Great Britain. Poland’s Iwona Podkoscielna and Aleksandra Teclaw rounded off the podium two minutes further afield.

Speaking after the race an elated Dunlevy described a technical hard course – “It was quite technical in the first part, and hard to stay on the power. In the straight sections we just got on the power together.

“We found out we won it ten minutes after the race and we are delighted. This had been what we have been aiming for since September – and it’s a different type of pressure to Rio or any other race. I had that belief that we could win.”

Pilot Eve McCrystal added that “it’s always hard to win a world title, but to defend it is even harder. We were told after one lap that we were ten seconds down – and we went on to win by almost twenty seconds. I knew our form was good going into it, and at this stage we have such confidence in each other.

“When you hear that you are down, you can either put your head down and give in, or you can just go for it. I could hear my children cheering for me at the sidelines, and we just went for it. When we get to the second lap we really get into our stride. We can just carry it on and settle. We had a good ride – it was steady and it was consistent.”

“It’s been great getting opportunities to race with other pilots and have different experiences, and it’s good to maybe not be winning all the times – and to be getting races!

“I really enjoyed the course today, it had a bit of everything. I kept my head down close to my watch and just listening to the beeps. On the second lap a cloud came over, which was lovely. I was starting to die coming through a town and then we hit the straight sections. Myself and Eve never want to let each other down and we do it for each other.”

In the Men’s B Tandem Time Peter Ryan and Sean Hahessy had a fantastic ride to finish in seventh place with a time of 32:42:56 – just over a minute behind world champions Great Britain. Damien Vereker and Dermot Radford were a further minute back in 12th place with 33:45:54.

Tomorrow the attention moves to the Road Races, with Declan Slevin competing in the Men’s H3 race. The Paracycling Road World Championships run from the 2nd – 5th August.