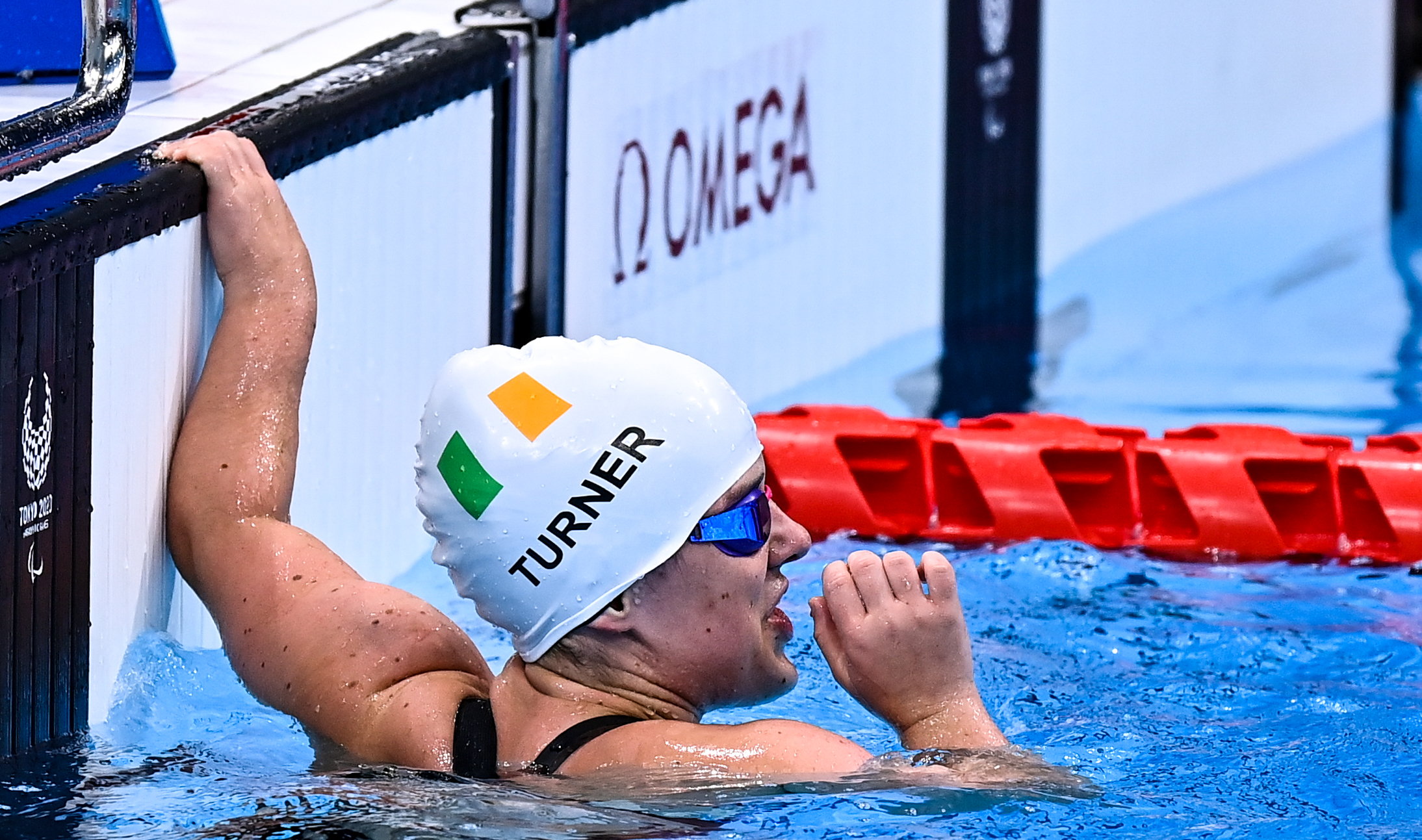 Laois star Nicole Turner (19) lowered her personal best twice in the same day when she finished eighth,  in  a new lifetime best of 35:29 seconds, in the S6 50m freestyle final.

Limerick’s Roisin Ni Riain (16) made a sensational Paralympic debut by knocking almost three seconds off her personal best  by finishing third in her S13 100m Butterfly heat in 1:08.18 to earn a place in her first final where she finished eighth in 1:09.26.

Ni Riain wasn’t fazed by being involved in a race that produced a new Paralympic record of 1:02.65 from Italy’s Carlotta Gilli. saying “I prefer to think of it just as a race – get in and swim as fast as you can.”

Neither were racing in their best event and Turner’s ambitions in Tokyo are so high that she wanted to go even faster, despite swimming a PB of 35:47 in her 50m freestyle heat and shaving two tenths of a second off her previous best across the day. “The 50m Freestyle is not a serious event for me, it just dusts off the cobwebs, so I couldn’t have asked for a better start,” Turner said.

“It was another PB and I’m probably being  a bit hard on myself because I’d have liked to have gone a little bit faster than that, but the aim is always to PB and I’ve achieved that so  I can’t ask for a better start.” The Portarlington star is clearly hoping to go even better in her main events over the coming days.
“I’m not as busy as I was in Rio so I have two days off now before the 100m Breaststroke on Saturday. I’m off on Sunday and then I have the 50m Butterfly on Monday and they are my main two targets.”

Ni Riain was also using her butterfly opener to tune up for her main events. “I’m delighted to get out and race in a Paralympic final,” the Limerick schoolgirl said. “The time was a bit slower than this morning but, that’s OK, hopefully I can work on that.

The Izu Velodrome also welcomed the first Irish Para Cyclists into action today. Paralympic debutant Richael Timothy competed in the C1-C3 3000m Individual Pursuit where she produced a blistering performance just narrowly missing out on a place in the final. She took the pace out hard from the beginning and kept a steady pace as she bore down on the aero bars before catching her opponent, Marzinke, on the third lap. Her finish of 4:11.69 was a huge 14 second personal best as she just missed out on a place in the final with an overall finish of 9th place in a race where the world record was broken twice.

“For me to get a PB is brilliant. It is my first event at a Paralympic Games. I only got on the team two years ago, it is just a case of getting the first event over with. Thanks so much for all the support back home. It has been amazing. All the support I’m getting from Galway and Roscommon has been amazing and I just hope I have done them proud and also made everyone at home proud. I just want to say thank you to everyone at home, everyone that is watching. Four years ago I didn’t think I would be here. I’m just delighted.”

Colin Judge showed incredible character in his Class 3 men’s singles qualifying event first round match. Paired up against World number 6, Zhao Ping, it was always going to be difficult for Colin. It was a nervous start for Colin who was making his first ever Paralympic appearance, and he lost the first set 11-6. However, he got to grips with is opponent in the second set taking Zhao to 9-9 but the Chinese star scored two quick consecutive points to leave Judge needing to win the remaining 3 sets. The third set was Judge’s best as he once again drew level with Zhao at 9-9 and then 10-10 but Judge wasn’t going to be denied this time and took the set 12-10. Unfortunately, that was as good as it got for Judge as Zhao found another gear clinching the 4th set and the match 11-6. Colin will now hope that Zhao wins his second match this evening and that he can beat his Brazilian opponent tomorrow in order to have hope of advancing to the next round.

“I felt there was very little in it all the way, either of us could have won but there are a lot of good things to take from it. It’s quite encouraging, it’s probably the most forehands I’ve ever played, I’ve been working on my forehands a lot so I’m happy I got that in so much and I didn’t hold back. Just slight adjustments for tomorrow and I think I’ll be good.”

Speaking about becoming a Paralympian he said “I’m over the moon, It’s been a dream come true and it’s really incredible to be out there, I’m going to cherish another opportunity tomorrow and we’re going to be ready”

Barry McClements first event was the S9 400m Freestyle Heat where he produced his best ever performance over the distance. Barry’s fifth placed finish was a new PB in a time of 4:27.11 but he narrowly missed out on a place in the final by 1 second as he finished 9th overall with 8 progressing through to this evening’s final.